Boy group MustB
made their comeback with its new song “Realize” after a year and a half.

MustB released its first mini-album “Let me rise again” at noon on July 16th, 2020. The title track ‘Realize’ is a hip-hop dance tune with addictive vocal samples based on a simple and rhythmical lead sound, drawing attention to the process of realizing something along a ray of light called “love” and the lyrics describe the end of the process as a “party.”

The mini-album contains a total of nine tracks, including the title track ‘Realize.’ Starting with the intro song, ‘Veil’ is a song that shows the hidden charm of MustB, which has not been shown to the world until now, ‘Love Formula’ is a story of sweet love, ‘Just Tell Me,’ a story about a brave confession, ‘Time’s Up’ in a future house genre based on intense synth sound, ‘i want u’ to enjoy stylish performances of MustB, a fan song ‘Shed a Light’ and ‘diamond’.

In particular, track No. 9 ‘Shed a Light’ is a fan dedicated song for MUFFIN and a memorial song for the former manager who died in a tragic car accident last year. All the members participate in the lyrics and expressed their feelings to the listeners by describing them as “lighthouses” that illuminate the future of MustB, overcoming situations such as rain and wind and rough waves in comparison to the word “navigation.”

MustB, meanwhile, is a five-member boy group composed of TaeGeon
, WooYeon
, DoHa
, SooHyun
, and SiHoo
, who made their debut with the single album “I Want U” in January last year, drawing attention with their bright and fresh charms. MustB, who stopped working after a car accident in April of the same year, will take on a new challenge this summer. 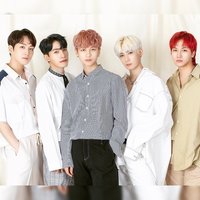 Mnet Confirms Season 2 Of “Queendom”, A Chance That “Kingdom” Will...

Malicious Rumors Of Park BoGum Being The Reason For Song HyeKyo...